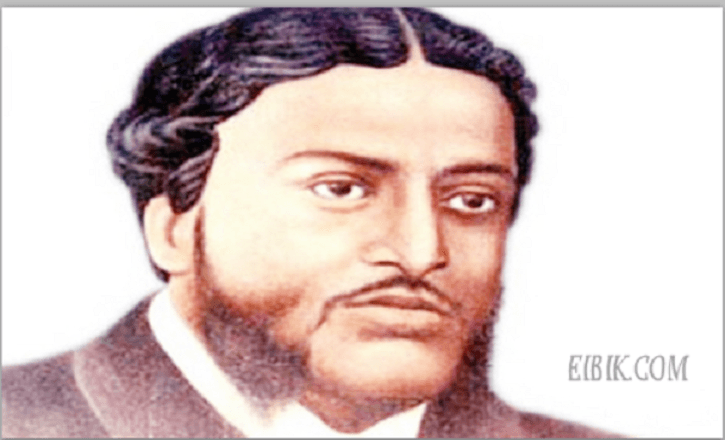 Michael  Madhusudan Dutta was the only child of Rajnarayan Dutt and his first spouse, Mother Jahnabi Devi. Rajnarayan Dutt was a renowned lawyer of the Sadar Civil Court in Kolkata.

Michael Madhusudan had lived in Kolkata since he was thirteen years old. He built a huge structure in the area of Khidirpur Circular Garden Rich Road (now Karl Marx Sarani).

Madhusudan’s primary education began with his mother, Jahanbi Devi. Jahnavi Devi made him famous with the Ramayana, Mahabharata,
Puranas etc. His early education began with Mufti Lutful Haque, the Imam of the Sheikhpura mosque in the village beside Sagarradari.
He has studied Bangla, Persian and Arabic with the scholar Imam. Madhusudan’s childhood was spent in the sea.

At the age of thirteen, Madhusudan came to Calcutta. After attending a local school for some time, he subsequently admitted to the Hindu College (now Presidency University). Michael Madhusudan Dutta was a talented student. So soon, Captain of the college Captain D. L. Became Richardson’s favorite student. Richardson instilled poetry in Madhusudan’s mind. The memory of Derozio’s patriotism, formerly a professor of the Hindu College, also gave him special inspiration.

Apart from him, his classmates were Bhudev Mukhopadhyay, Rajnarayan Basu, Gourdas Basak, eminent persons of the nineteenth century, such as the Paricharan Sarkar.

At the age of eighteen, his ambition to become a Mahakali and to go to the villa became entrenched in his mind. In 1843, Reverend Krishna Mohan expressed his desire to adopt Christianity at Bandyopadhyay.

Later that year, on February 13, he went to an Anglican church called the Old Mission Church in Mission Row, and converted to Christianity.

He was initiated by Pastor Diltree. He is the name of his “Michael”. Madhusudan became known as “Michael Madhusudan Dutta”. His conversion caused a great stir in society.

Rajnarayan Dutt declared his ill-fated son as a son-in-law. After adopting Christianity, Madhusudan continued his studies at Bishops College in Shivpur.

Here he teaches Greek, Latin, Sanskrit and so on. Although Rajnarayan Dutt abandoned her, the Bishops were paying for his college education. After four years he stopped sending money.

Madhusudan Dutta then went to Madras (now Chennai) to share with his Madrasi friends. It is said that he went to Madras for the money by selling his textbooks anonymously to relatives.

Madhusudan could not make a special advantage at Madras. With the help of local Christians and English, he got an English teacher’s job at a school.

However, the salary he received would not have cost him. It was during this time that he began writing in English newspapers. His poems were published under the pseudonym Madras Chronicle.

He also edited a newspaper called Hindu Chronicle. But within a short time, the magazine had to be closed.

At the age of twenty-five, she wrote in her first poem, The Captive Lady, in dire poverty. His reputation as a poet and skilled English writer spread.

After reading the book, Abhinav Bethune wrote a letter to Michael and advised him to return home and write poetry in Bengal. In 1856, Madhusudan returned to Calcutta. He did not bring his wife with him at that time.

Then he moved to the city of Versailles in France in 1860. But his financial condition was very bad. For only Ishwar Chandra Vidyasagar, he was able to come to India after finishing his law studies.

But he never used his education in Calcutta, and in addition, died for poverty. The poet went on to study law in England, but he did not stay in England for long because of the weather and racism.

Michael Madhusudan Dutta made his debut in Bengali literature as a playwright. He lacked proper drama in Bangla drama literature while
Ramnarayan Tarkartan translated English into the disturbed ‘Ratnabali’ drama.

Michael Madhusudan interested in writing plays to meet this deficiency. In 1859 he composed the play ‘Sharmistha.’ This is the first basic drama written in the Bengali language. He composed two comedies, namely: “What is it called civilization” and “A rook in the neck of an old man” and a full ‘Padmavati’ play In 1860.

Michael Madhusudan Dutta highly influenced by his literary work and his life, especially by the English poet Lord Byron. His great creation Meghnad slaughter was epic, and although it was not easy to make it known, he made himself an individual in Bengali literature through the epic.

As part of this, he introduced the first Homeric style writing in poetry. He once said to himself: “I did not wake up one morning to find myself successful; the success of this poem was made possible through many years of hard work.”

Michael Madhusudan Dutta was one of many linguists. As a child, language education began from the village toll through his Persian language education. Besides English, he could speak fluently in Latin, Greek, Persian, Hebrew, Telugu, Tamil, and so on.

Michael Madhusudan could even write poems in Persian and Italian. He knew twelve more languages besides his mother tongue.

The appearance of Michael Madhusudan in the Bangla drama is abrupt. In 1852 Taracharan Sikder, J. C. With the hands of Gupta and
Ramnarayan Tarkaratne, a drama stage was started in the fancy stage in Bengal. The quality of plays written at this time was not very good.

In 1858, the Ratnavali play by Ramnarayan Tarkartan performed at Belgachia Theater in Kolkata under the patronage of Ishwar Chandra Singh and Pratapchandra Singh of Paikpara.

Madhusudan’s educated mind troubled by a large amount of money and zeal of zamindars for this modern drama. Then he himself became a playwright. He broke the tradition of Ramnarayan Tarkartan’s Sanskrit drama and wrote the first modern Bangla drama, following Western style.

We strive for fairness and accuracy of Michael Madhusudan Dutta Biography. If you observe something that doesn’t look right, contact us!

What are the things to consider before basement conversion?

How to create a digital marketing strategy to keep up with the market standards?

How can rare books increase the value of my book collection?

What Is An Orbeez Gun? Are They Safe To Use?