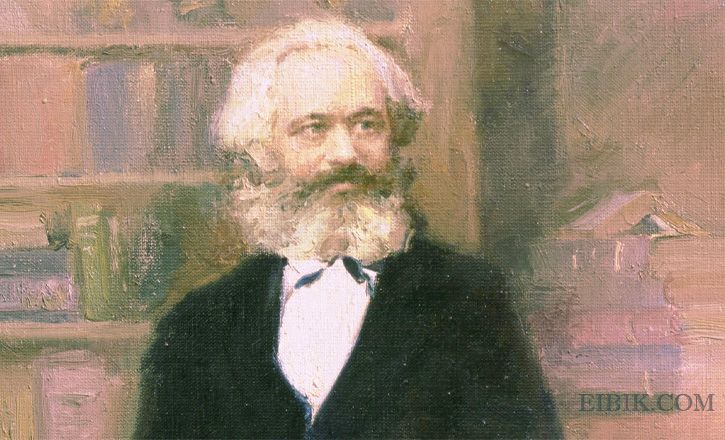 Karl Heinrich Marx (May 5, 1818 – March 14, 1883) is a German philosopher, economist, historian, social scientist, political theorist, socialist revolutionary. Marx is one of the most influential figures in all of human history.

Among Marx’s most famous works are three volumes of capital And the Communist Manifesto (1848) co-authored with Friedrich Engels. Marx’s theories of society, economy, and politics are known as Marxism.

According to Karl Marx, human societies are evolving through class struggle. This struggle manifested in the capitalist system between the ruling classes (who simultaneously control the state, and factories) and the working class (whose only way of living was to survive the minimum wage in the capitalist factory).

Marx said that only a fraction of the new value that the working class generates in terms of production, they receive fees, and the owners of the capital absorb the lion’s share of the surplus. Following dialectical materialism, Marx claimed that capitalism, like the previous social systems, would be broken due to its internal divisions and class struggles and the birth of socialism.

Marx feels that there is no alternative to the armed revolution to end the existing capitalist tyrannical system and unite the working class in order to liberate themselves.

Karl Marx was born into a Jewish family in the Trier province of the lower Rhine province of Prussia. He was the third of nine children in the family. Father Heinrich Marx is a descendant of ancestors who was a rabbi.

Of course, the effects of the age of over-theism and enlightenment can be seen in them. Many of them praised philosophers like Voltaire and Russo. At birth, Hinrich Marx was named Herschel Mordechai, his father’s name was Levy Mordechai (1743-1804) and his mother’s name was Eva Lwow (1753-1823). Heinrich was born to a Jewish family, but, due to religion, was prevented from practicing law, he left Judaism and joined the Lutheran doctrine.

Lutheranism the state Protestant religion of the Prussian Empire at that time, so he converted to the Roman Catholic majority in hopes of gaining many privileges as a Lutheran minority. Carl Marx’s mother is Henriette née Pressburg (1788-1863).

He is the grandfather of industrialists Gerard Philips and Anton Philips (not his own) and the descendants of the Barent-Cohen family. Henriette’s father is Isaac Heijmans Presburg (1747-1832) and his mother is Nanette Salomon Barent-Cohen (1764-1833).

Nanette’s father was Salomon David Barent-Cohen (d. 1807) and his mother was Sara Brandes. The Salomon and Sarah were again uncles-in-law of Nathan Mayer Rothschild’s wife.

Karl Marx studied at home until the age of 13. At the end of kindergarten, he attended Trier Gymnasium, graduating at the age of 17. He then began to study law at the University of the Forest. He wanted to study literature and philosophy, but his father thought that he could not prepare himself as a Karl Scholar.

Within a few days, his father transferred him to Humboldt-Universität in Berlin. At that time, Marx wrote poems and essays on life, the language of his writing was the theology of his father, the language of the most theological theology. It was at this time that young Atheists accepted atheism. In 1841 he received his Ph.D. His Ph.D. title was “The Difference Between the Democritean and Epicurean Philosophy of Nature.”

The University of Berlin had two parts. Young Hegelian, the philosophical student and the Left, was a journalist society centered on Ludwig Fairbach and Bruno Bauer. The teacher society was GWF Hegel. These two divisions were contradictory.

Despite criticizing Hegel’s scientific assumptions, the leftists followed Hegel’s dialectical approach to the harsh criticism of established religion and politics. Some of the young Hegelian Aristotle-Heralds the resemblance of Hegel-North philosophy with Northern philosophy.

For example, Max Stirner, in his book Der Einzige und sein Eigenthum (1844) He criticizes Bauer, calling him a godly person for discussing the abstract concepts of abstract ideas. Marx was fascinated by reading this book and abandoned the materialism of Fairbach.

This epistemological break helps substantially to establish the basis of his conception of historical materialism. With this new concept, he also opposed Stirner. He also wrote a book called Die Deutsche Ideologie (1845). However, before 1932, the book had not seen its face published.

In late October 1843, Marx arrived in Paris. The city then became the headquarters of the German, British, Polish and Italian revolutionaries. He went to Paris to work with German revolutionary Arnold Ruge on Deutsch-Französische Jahrbücher.

After the fall of the German-French anniversary or the fall of Deutsch-Französische Jahrbücher, Marx wrote an article in Paris’ most progressive German newspaper (the secret society called “League of the Just”). The subject of this article was “The Jewish Question” and Hegel.

Outside of writing, Marx’s time spent writing about the history of the French Revolution, the works of Pierre-Joseph Proudhon, and the rural proletarians.

William H. Sewell Jr., in his Work and Revolution in France, said of his special interest in the condition of the Proletarians at the time.

… With Marx’s sudden proletarian support for the doctrine of destitute reason, his close contact with the socialist intellectual society of France can be established directly before.

Marx re-evaluates his relationship with the young Hegelian. This is part of a re-evaluation of “On the Jewish Quest,” written in 1843, in response to Bauer’s atheism.

It was at this time that he wrote another essay, which was about political liberation, how Judaism and Christianity oppose human freedom, and criticism of contemporary views on civil and human rights. The certified Communist Engels led Marx’s economic studies and encouraged his working-class status.

Thus Marx became a communist, expressing his humanistic view of communism through the creation of the Economic and Philosophical Manuscripts of 1844 (not published before the 1930s), against the alienated working-class alienated working class (alienated) in the capitalist society Speak up.

According to him, in such a communist society. Everyone can build himself independently and develop the production system based on mutual cooperation. In January 1845, when the Vorwärts approved the attempted assassination of Friedrich William 4, King of Prussia, all the revolutionaries, including Carl Marx, expelled from Paris.

He left Brussels with the Engels. This is where he studies history to complete historical materialism. In its continuation in its The German Ideology (1845), it says that the nature of each individual depends on the condition of the object that determines their production.

It was through this that he designed the production and predicted the fall of industrialized capitalism and the establishment of communism instead. This followed by criticism of French socialism, called The Poverty of Philosophy (1847).

This was a response to “The Philosophy of Poverty” (1847) by Pierre-Joseph Proudhon. Thinking intellectually, Marx’s The German Ideology and the Poverty of Philosophy are the foundations of the later Communist manifesto. This advertisement was the principle of the Communist League.

In 1848 many revolutions took place across Europe. A lot of things change. Marx captured and later expelled from Belgium. Meanwhile, the revolutionaries persuaded King Louis-Philippe of France to arrange for the return of Marx to Paris.

He returned to Paris at the invitation of the king. It was during this time that the revolution, known as the June deice uprising, took place in Paris.

Return to Germany and deportation

In June 1859, Marx returned to the city of Cologne, Germany, after the end of June Daisy Uprising in Paris and Neue Rheinische Zeitung began publishing. He twice accused of publishing the magazine.

For the first time on February 7, 1849, the press misdemeanor crime and the next time, on February 8 of the same year, to release the incitement to armed rebellion. He released twice. But the continuation of this continuation continues.

One time the magazine banned and he forced to return to Paris. But Paris refused to accept him as a refugee, permanently moving to London. London took him as a refugee on the continent of Europe.

Marx married Jenny von Westphalen. Jenny was the educated daughter of a Prussian baron. Their relationship had to be kept secret, as the Marx family did not consent to the marriage.

They were married on June 19, 1843, in Kreuznacher Pauluskirche in Bad Kreuznach. The financial condition of the Marx family was not very good in the first half of the 1850s. They then lived in a three-room flat at Dean Street in Soho, London.

Meanwhile, four of their children were born. After living in London, three more children were born. Of these seven, only three survived until adulthood. Marx’s source of income simply the subsidy provided by Engels and the salary he received as a foreign correspondent for the New York Daily Tribune.

Jenny inherits some money from an uncle and mother. This means helping the Marx family live in a better and healthier environment at 9 Grafton Terrace in Kentish Town.

Although the financial situation not very good, Marx supplied his wife and children with all the materials they needed to keep pace with the bourgeois society.

After Jenny’s death in December 1881, Marx suffered a catarrh. The disease kept him sick for the last 15 months of his life. The disease later develops into bronchitis and eventually to pleurisy.

He died March 14, 1883, because of this pleurisy. Marx, who had no nationality at the time of his death, buried on March 17 in Highgate Cemetery, London. Two sentences written on his tomb.

Writing first, the last line of the Communist Manifesto, “Workers of all land unite,” followed by the famous quote from the English version of the 11th thesis on Firebach. Philosophers simply explain the world in different ways – the main thing is to change it.

In 1954, the Communist Party of Great Britain established a memorial at the tomb of Karl Marx, on top of which was a sculpture of Marx’s face. Lawrence Bradshaw is the architect of the facade. The actual tomb is flat. Only 11 people attended Marx’s funeral.

Marx’s theories of society, economy, and politics are known as Marxism. Marx’s philosophy of history known as historical materialism. According to Marx, there is nothing as flexible as human nature.

It will be seen that the people of this new society have become quite different from those who have grown up in a capitalist society. According to Hegel, the liberation of human consciousness is the objective of history.

Hegel thinks that achieving that goal will only be possible when we all realize that we are part of the universal human element. Marx transformed Hegel’s ‘normative’ interpretation into a ‘material’ ideal, the ideology that satisfies our material lack of materiality regarded as the driving force of history. And in that ideal the only class struggle considered the path to liberation.

The working class will be the tool of universal liberation; Because this ideal rejects the notion of personal wealth and leads to collective ownership.

Marx believed that when workers engaged in collective ownership, the ‘stream of collaborative wealth’ in Marx’s language would flow to society at a much more adequate rate than the speed at which individual-owned wealth spreads.

We strive for fairness and accuracy of Karl Marx Biography. If you observe something that doesn’t look right, contact us!

Shopfronts! An Effective Marketing Strategy to Raise the Value of Products

How health and nutrition industries are booming these days

The Legacy Printing – Harnessing The Power Of Packaging Visuals

13 Best Multimeters For Electronics Technicians In 2021

How To Know It’s Time for a New CNC Machine