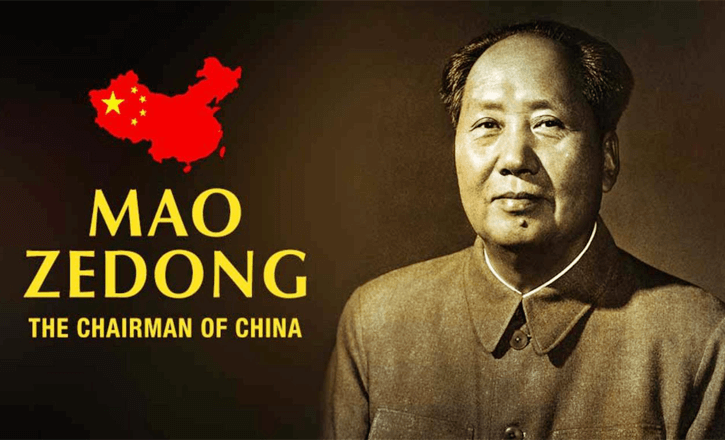 Mao Zedong (known also as Mao Tse Tung) (English: Mao Zedong Chinese: 毛泽东,) (born December 26, 1893; died September 9, 1976) is a Chinese revolutionary Marxist theorist and political leader. He ruled China from its founding in 1949 until he died in 1979. Was the leader. Mao Zedong founded the Communist Party of China. His theoretical contributions to Marxism-Leninism, his war strategy and his principles of communism are now collectively known as Maoism.

Although Shun Sheng was a poor farmer, he worked in the army for a few years, improved his condition by buying land, and became a middle-class householder by trading in raw materials. Mao’s other two brothers were Sen and Tan. Mao’s mother was the daughter of the Ben family of Tong Shiato village in Xiangxiang District.

He was kind. He had a great devotion to Buddhism. Mao has been working on the farm since he was just seven years old.

In 1901, at the age of eight, Mao was admitted to the village school. And studied in that school till the age of thirteen. In 1906, Mao completed his schooling in the village. Then his father found it profitable to enlist him in the army. Earlier, an eleven- to the twelve-year-old girl was married to Mao.

Mao Tse-tung later wrote about this: ‘It was a very nominal marriage. I never lived with her and never considered her my wife. ‘

Mao Tse Tung moved to Beijing, where his mentor, Yang Changji, took a job at Peking University. Yang thought that Mao was exceptionally “intelligent and handsome”, so Yang hired him as an assistant to the university librarian Li Dajao, noting that Li was an early Chinese communist.

Lee wrote several new essays on the October Revolution in Russia, when the Communist Bolshevik Party, led by Vladimir Lenin, seized power. Lenin was a supporter of socio-political theory Marxism; This Marxism was first developed by the German sociologists Karl Marx and Friedrich Engels, And Lee’s articles linked Marxism to the doctrines of the Chinese revolutionary movement.

Being “more revolutionary”, Mao was initially influenced by Peter Kropotkin’s anarchism, the most radical reformist doctrine of the time.

Chinese anarchists, such as Kai Yuanpei, the chancellor of Peking University, demanded a complete social revolution in social relations, family structure, and women’s equality, rather than a simple change of government by revolutionaries of earlier eras. Mao Zedong joined Lee’s reading circle and in the winter of 1919 “rapidly advanced and embraced Marxism.”

Despite low wages, Mao lived in a small room with seven other Hunani students, but believed that the beauty of Beijing gave them “transparent and living compensation.” At university, Mao was reprimanded by other students for his rural Hunanian accent and low position.

He attended the university’s philosophy and journalism associations and attended lectures and seminars such as Chen Tusiu, Hu Shih, and Qian Xuantang. When Mao’s time in Beijing ended in the spring of 1919, he traveled to Shanghai with friends who were preparing to go to France.

He did not return to Shaoshan, where his mother was physically ill. His mother died in October 1919 and his father died in January 1920.

On May 4, 1919, students in Beijing gathered at the Gate of Heavenly Peace to protest the Chinese government’s weak resistance to Japanese expansion in China. These demonstrations ignited the countrywide Fourth May movement and ignited the New Culture Movement.

In Changsha, Mao Zedong started teaching history at a primary school and organized protests against the bipartisan governor of Hunan province, Zhang Xing Yao. This Zhang Xingya was also known as the “poisonous Zhang” because of its corrupt and violent regime.

In late May, Mao Zedong founded the Hunan Student Association with Shuheng and Deng Zhangxia and organized a student strike; In June and July 1919, he started a weekly radical magazine called Jiang River Review (Xiangjiang Pinglun).

Using local languages that understood by the majority of the Chinese people, he advocated the need for “the great unity of the popular masses” and the strengthening of trade unions capable of carrying out a non-violent revolution. His ideas were not Marxist but were strongly influenced by Kropotkin’s ideas of mutual aid.

Zhang was banned by the Student Association, but Mao continued to publish after accepting the editorship of the liberal magazine Naya Hunan (Jin Hunan) and continued to provide articles for the popular local magazine Justice (Ta Kong Po).

Several of them have supported feminist views, demanding the emancipation of women in Chinese society. In December 1919, Mao helped organize a general strike in Hunan, with some concessions, but was threatened by Mao and other student leaders, and Mao returned to Beijing to visit the ailing Yang Changji.

Mao Zedong saw that his articles had gained a degree of fame in the revolutionary movement and had created support for overthrowing Zhang. He was influenced by Thomas Kirkup, Karl Kautsky, and Marx and Engels – especially the newly translated Marxist literature – especially the Communist Manifesto, but he was still liberal in his views.

Mao Tse Tung traveled to Tianjin, Jinan and Kufu before going to Shanghai. In Shanghai, he worked as a laundryman and met Chen Tu Siu. He noted that Chen’s adoption of Marxism “probably deeply affected me, which was probably an important time in my life.”

In Shanghai, Mao met one of his old teachers, Ye Peiji, who was a revolutionary and a member of the Kuomintang (KMT) or Chinese nationalist party. Note that at that time Kuomintang was gaining increasing support and influence. E Mao was introduced to former KMT General Tan Yankee, who was loyal to the troops stationed on the Hunan border with Guangdong.

Tan conspired to overthrow Zhang and Mao helped him organize the Changsha students. In June 1920, Tan led his troops to Changsha and Zhang fled. In the subsequent reorganization of the provincial administration, Mao was appointed headmaster of the junior department of the First Normal School. Now earning a large income, she married Yang Kaihui in the winter of 1920.

Establishment of the Communist Party of China: 1921-22

The Chinese Communist Party founded in 1921 by Chen Tusiu and Li Dajao as a research society and informal network at the French Convention in Shanghai. Mao Tse Tung founded a Changsha branch and also a branch of the Socialist Youth Army. He opened a bookstore under the control of his new Cultural Book Society, intending to promote revolutionary literature throughout Hunan.

Mao Zedong involved in the Hunan autonomy movement, in the hope that a constitution in Hunan would increase civil liberties and facilitate its revolutionary activities. When the movement succeeded in establishing provincial autonomy, Mao forgot about his involvement.

By 1921, small Marxist groups existed in Shanghai, Beijing, Changsha, Wuhan, Guangzhou and Jinan; It was later decided to hold a central meeting, which began on July 23, 1921, in Shanghai. The first session of the National Congress of the Communist Party of China was attended by 13 delegates, including Mao.

In June 1923, delegates to the Third Congress of the Communist Party of Shanghai reaffirmed their commitment to work with the Kuomintang. In support of this position, Mao Tse Tung was elected to the Party Committee; And arranged to stay in Shanghai.

At the first Kuomintang Congress held in Guangzhou in early 1924, Mao elected an alternate member of the Kuomintang Central Executive Committee and adopted four resolutions for decentralization of power in urban and rural bureaus. Comrade Li Li-san of Hunan was suspicious of him because of his enthusiastic support for the Kuomintang.

Nanchang and the Autumn Crop Rebellion: 1927

The CPC continued to support the Wuhan Kuomintang government, a position Mao initially supported, but by the time of the CPC’s fifth congress he had changed his attitude, deciding to strengthen all hopes in the peasantry. When the Wuhan government expelled all communists from Kuomintang on July 15, the question became controversial.

The CPC established the Red Army of Chinese workers and peasants to deal with Chiang Kai-shek, better known as the “Red Army”. A battalion led by General Chu Te ordered to capture the city of Nanchang on August 1, 1927, which became known as the Nanchang Rebellion. They were initially successful, but after five days they were forced to retreat, heading south to Shanto, and from there they were driven into the Fujian desert.

Mao Zedong appointed commander-in-chief of the Red Army and led four regiments against Changsha in the autumn crop revolt in the hope of starting a peasant revolt across Hunan.

In January 1929, Mao and Chu evacuated 2,000 men and another 800 men provided by Peng and moved their forces around Tongu and Jinfeng in southern Jiangxi.

In February 1930, Mao formed the Soviet government of the southwestern province of Jiangxi in his territory. Kuomintang General He Jian captured his wife and sister and beheaded them, leaving them traumatized, In November.

On October 14, 1934, the Red Army broke through the Kuomintang Line in Jinfeng, in the southwestern corner of Jiangsu Soviet, and embarked on a “Long March” with 85,000 troops and 15,000 cadres.

Is the reverse image a useful tool?

Promotional Marketing Products Is Good Way For Growing Your Business