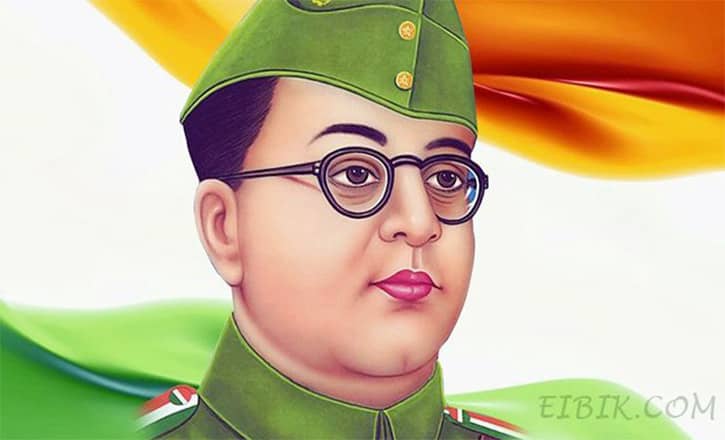 Netaji Subhas Chandra Bose(23 January 1897 – 18 August 1945) is a legendary leader of India’s independence struggle. He is better known as Netaji. Netaji Subhash Chandra Bose elected the President of the Indian National Congress twice. But he had to resign to express his views against the ideological conflict with Mahatma Gandhi and the open criticism of the Congress’s foreign and internal policies.

“Freedom is not given – it is taken” Netaji Subhas Chandra Bose

Subhas Chandra Bose believed that Mahatma Gandhi’s nonviolence and satyagraha policy were not enough to bring India independence. Because of this, he chose the path of armed struggle. Subhas Chandra established a political party called the Forward Block and demanded full and immediate independence of India from British rule.

He imprisoned by eleven British authorities. His famous quote “You give me blood, I will give you freedom.” Even after World War II announced, his ideology had not changed; Rather, he sees this war as an opportunity to exploit the weaknesses of the British.

At the outbreak of the war, he left India in secret and travelled to the Soviet Union, Germany and Japan to assist the British in attacking India. With the help of the Japanese, he rebuilt the Azad Hind Fauj and later led.

The soldiers of this force were mainly Indian prisoners of war and the British were working in Malay, Singapore and other parts of South Asia. With the diplomatic, political, financial and military support of Japan, Subhas Chandra Bose established the exiled Azad Hind government.

zad Hind Fauj, waging war against the British Allies in Imphal and Brahman (present-day Myanmar). Some historians and politicians have criticized Subhas Chandra for his Alliance with the Nazis and other warring forces against the British; Even some have accused him of being sympathetic to Nazi ideology.

However, he sympathized with his pioneering social and political ideology, citing his advertisement as a sign of realpolitik. It should be noted that where the Congress Committee voted in favour of Indian dignity or Dominion status, Subhas Chandra Bose first voted for India’s full independence. Jawaharlal Nehru and other young leaders supported him.

Finally, in the historic Lahore session of the National Congress, Congress obliged to utilize the full swaraj policy. Angry at the hanging of Bhagat Singh and the failure of the Congress leaders to save his life, the anti-Subhash Chandra Gandhi-Arwin movement started an anti-agitation movement.

Subhas Chandra Bose was imprisoned and deported from India. When he returned to India after defeating the ban, he was again detained.

Subhas Chandra Bose was born on 23 January 1897, in Cuttack (Odia Bazar) in the present state of Odisha. He was ninth among the fourteen children of Janakinath Basu, a prominent Bengali lawyer, and a 14-year-old goddess of influence. Until the sixth grade, Subhash Chandra studied in an English school in Cuttack; The school currently named Stuart School.

Subhas Chandra Bose was then admitted to Ravensh Collegiate School at Cuttack in Kolkata. Subhash Chandra was a talented student. He took first place from Calcutta in the Matriculation Examination in 1911. In 1918, Kolkata University passed the BA examination with honours in philosophy from the affiliated Scottish Church College.

Subhas Chandra Bose then went on to pursue higher studies at Phys William Hall, Cambridge University. He almost recruited to get good marks in the civil service exam. But he rejected the appointment with a revolutionary conscious attitude.

In this regard, he said, “The best way to declare the end of a government is to withdraw [himself] from it.” It was during this time that the Amritsar massacre and the repressive Rowlatt Act of 1919 angered Indian nationalists.

Back in India, Subhash Chandra started writing in the newspaper Swaraj and appointed in charge of promoting the Bengal Pradesh Congress Committee. His political guru was Chittaranjan Das, the patron of the fierce nationalism of Bengal.

When Deshbandhu elected Mayor of the Kolkata Municipal Corporation in 1924, Subhas Chandra served under it. In 1925, he imprisoned along with other nationalists and deported to Mandalay. Here he was suffering from tuberculosis.

Subhas Chandra Bose was a devout Hindu. He spent a lot of time for meditation. Swami Vivekananda’s ideology inspired him. From the student body, he was known for his patriotic reputation.

“The secret of political bargaining is to look more strong than what you really are.” Netaji Subhas Chandra Bose

In 1934, he met his first love, Emily Schenkel, in Vienna. They were married in 1937 in Bad Gastein. After the death of his father, the British government permitted him to come to Kolkata for a while only to observe religious rituals.

In this election, Gandhi supported Pattavi Sitaramaya; After hearing the results of the election, Gandhi said, “Puttavir’s rate is my rate”. But even though he was victorious, he could not perform properly. Gandhi’s followers were hampering his work.

“Give me blood and I will give you freedom!”    Netaji Subhas Chandra Bose

Govinda Ballav proposed at this time that “the Executive Council should be restructured”. Thus, although Subhas Chandra Bose won the election, he asked to submit his resignation as a result of Gandhi’s opposition; Otherwise, all members of the executive committee will resign.

For this reason, he resigned from the Congress and formed the All India Forward Block. In 1938, he proposed the National Planning Council.

Subhash Chandra Bose suggested that when the British would allow the independence of Indians, they should not be seated – to benefit from the political turmoil of World War II.

Subhas Chandra Bose believed that India’s independence depended on the political, military and diplomatic support of other countries. So he took the initiative to build a military base for India.

But Subhas Chandra Bose did not understand the Pashto language of Afghanistan and took with him the leader of the Northwest Frontier Province, Mia Akbar Shah. Since he did not know Pashto, he feared that the Afghans might consider him a British character.

Therefore, on the advice of Mia Akbar Shah, he introduced himself to the inhabitants as deaf and dumb. From there, Subash Bose went to Moscow to meet an Italian citizen called ‘Count Orlando Mazzotta’. From Moscow to Rome, he arrived in Germany.

Subhash Chandra Bose founded the Free India Center in Berlin. He sought the help of German Chancellor Adolf Hitler for India’s independence. But Hitler’s indifference to India’s independence broke his morale. As a result, Subhash Bose left Germany in 1943. A German submarine takes him to a Japanese submarine at the bottom of the sea, from where he arrives in Japan.

Meanwhile, under the leadership of Netaji Subhash Chandra Bose, the dictators like Hitler-Tojo also bowed their heads towards the Alliance. His ideas inspired leaders like Aurobindo Ghosh, Surya Sen, Bhagat Singh of India and poets like Rabindranath Tagore, Kazi Nazrul Islam. Netaji became the grandson of all Indians.

The Indian National Army formed initially in the hands of nationalist leader Ras Bihari Bose. In 1943, Ras Bihari Bose transferred the responsibility of the army to Subhas Chandra Bose.

“Soldiers who always remain faithful to their nation, who are always prepared to sacrifice their lives, are invincible.”    Netaji Subhas Chandra Bose

It had about 85,000 troops, with a separate women’s force (Rani Lakshmibai Combat). The authority of this force was in the hands of the Provincial Government, named “Provincial Government of Free India” (Arjee Hukumt-e-Azad Hind). This government had its own courts, currency, and laws. 9 Axis powers accept this government. The INA troops help the Japanese in the battle of Arakan and Mektila.

Subhash Chandra Bose hoped that a large number of soldiers would join the INA after hearing the news of the INA attack on the British. But this is not the case. On the contrary, as the war situation worsened, Japan began to withdraw its troops from the INA.

At the same time, the money supply from Japan declined. Finally, with the Japanese surrender, the INA surrendered. In 1934, Subhas Chandra became seriously ill while in prison in Mandalay, Burma (now Myanmar). The British government agreed to release him on one condition that he could be released if he travelled abroad without touching any part of India.

Subhas Chandra bose plans to go to Europe and reach Vienna. In retirement after two years of treatment, he decided to write two books, his autobiography ‘Indian Pilgrim’ and ‘India’s Struggle for Freedom’. At that time, Emily Schenkel, an Austrian woman, assisted in typing her manuscript, who would later become her secretary.

This is Emily Schenkel’s subsequent romance and its conclusion. One of their daughters, Anita Bose Puff. Emily Schenkel never came to India, but he always had good communication and good relations with the larger Basu family and Netaji’s associates. He died in 1996.

We should have but one desire today – the desire to die so that India may live – the desire to face a martyr’s death, so that the path to freedom may be paved with the martyr’s blood.” Netaji Subhas Chandra Bose

Click To Tweet
However, many of his supporters, especially in Bengal, denied it at the time and refused to believe the facts or circumstances of his death. The conspiracy theories appeared within hours of his death and have continued to this day, keeping alive various war stories about Bose.

We strive for fairness and accuracy of Netaji Subhash Chandra Bose Biography. If you observe something that doesn’t look right, contact us!