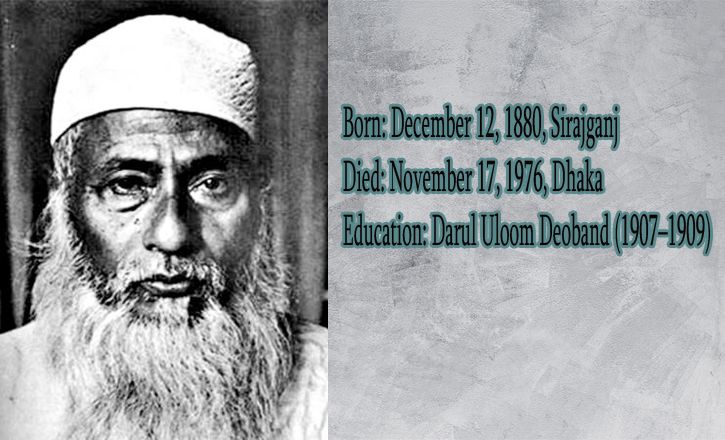 Maulana Abdul Hamid Khan Bhashani (12 December 1880 – 17 November 1976) was one of the leading grassroots politicians and mass movement heroes of British India. Who played a vital role in the politics of Pakistan, created in 1947 and Bangladesh in1971.

Abdul Hamid Khan Bhashani is well known to the people of Bangladesh as a “Mazlum Jananeta.”

He was one of the main leaders who formed the United Front in the 1954 elections. He also played a significant role in establishing an independent Bangladesh.

For most of his political life, he involved with the Maoist Communists and left-wing politics. Many of his followers used to call him “Lal Mawlana.”

He was a visionary leader and in the fifties, it convinced that Bangladesh was a stagnant state structure as part of Pakistan.

At the 1957 Kagameri Conference, he played the historic bell of separation of East Pakistan for the first time, called “Assalamu Alaikum” by the western rulers of Pakistan.

Hamid spent some time at his shelter. Then shortly little before World War I, Abdul Hamid Khan Bhashani visited the house of Shamsuddin Ahmed Chowdhury in Panchbibi Upazila of Jaipurhat district in 1893. There he worked as a motherress of the madrasas and took the responsibility of educating the landlord’s sons and daughters.

In 1897 Pir sailed to Assam with Syed Nasiruddin.1903 joined the movement. Deoband went to 1907 for Islamic education. The study for two years, he returned to Assam. When Deshbandhu Chittaranjan Das visited Mymensingh in 1917, Hamid became infatuated of his address. He joined the Congress in 1919 and participated in the Non-cooperation Movement and received ten months imprisonment.

When Deshbandhu Chittaranjan Swaraj Party formed in 1923, Bhasani played a role in organizing the party. In 1925, he married Alema Khatun, daughter of landlord Shamsuddin Mohammad Chowdhury of Jaipurhat. He accompanied his brother Alema Khatun to Assam and started the first peasant-peoples movement in Assam In 1926.

In 1929, Brahmaputra of Assam’s Dhubri district organized the first farmers’ conference in river Bhasan. From here, it was named “Bhasani Mawlana.” Then the word Bhasani was added to the end of its name.

In 1931, a large farmers’ conference was held at Santosh Kagameri, in Korakhola in Sirajganj in 1932 and Gaibandha in 1933.

Maulana Bhashani left the Congress in 1937 and joined the Muslim League. At that time, when the ‘Line system’ was started in Assam, he led the movement against this autocratic system. During this time, he formed the “Assam Farmer’s Workers’ Association” and established the resistance in various places including Dhubri, Goalpara.

He joined with Sher-e-Bangla AK Fazlul Haque at the Muslim League’s Lahore Conference In 1940.

In 1944, Maulana Bhasani was elected president of the Assam Provincial Muslim League. The 1945-46 “Bengal Khedao” agitation against the Bengalis started in Assam in 1945-46. During this period, Bhasani Barpeta, Guwahati and various places of Assam visited to protect the Bengalis.

In early 1948, he elected a member of the East Bengal Governing Body unopposed as the nominee of the Bengal Muslim League.

On 17 March 1948, the Manager demanded the Speaker to conduct the affairs of the meeting in Bengal and complained about this demand. Participating in the budget speech on 19 March, he said that 75% of the taxes collected by the central government from East Bengal should be given to the province.

Finally, Maulana Bhasani resigned as a member of the Governing Body. Nevertheless, the then Governor of East Bengal canceled the election of Maulana Bhasani by executive order. As a result of the anti-people activities of the Bengal Provincial Muslim League. Maulana Bhasani convened a Muslim League activist conference at the Rose Garden in Tikatuli, Dhaka, 23-24 June 1949. The meeting held on 23 June. About 300 officers from over the country attended the conference. Ataur Rahman Khan led over the meeting.

The first public meeting of the Awami Muslim League held at Armanitola Maidan on 24 June. In mid-1949, food deprivation occurred in East Bengal. A public meeting of the Awami Muslim League continued at Armanitola Maidan On 11 October. The meeting demanded the resignation of the East Bengal cabinet for its failure to resolve the food problem and Maulana Bhasani led a hungry procession, breaking section 144. Abdul Hamid Khan Bhashani arrested on 14 October 1949, in Dhaka Central Jail for leading a hungry procession.

In 1950, the government organized a hunger strike at Dhaka Central Jail to protest the firing on the prisoners of Khapra ward of Rajshahi Jail and discharged from jail on 10 December 1950. The all-party state-language working council formed at a meeting chaired by him at the Bar Library in Dhaka district on 30 January 1952, demanding that Bangla be the official language of Pakistan.

Maulana Bhashani arrested for 16 months due to his cooperation in the state language movement. However, Maulana Bhasani released from jail on 21 April 1953, under pressure from public opinion. On 3 December 1953, before the election of the Provincial Assembly of East Bengal, the president of the Krishak-sramik Party Sher-e-Bangla A.K. Fazlul Haque and Hossain Shaheed formed a joint front called “Suhrawardy”.

The United Front won a majority of the council in the province and gained 237 seats out of 228 has gained an absolute majority. After forming a government led by Fazlul Huq, on 25 May 1954, Maulana Bhasani traveled to Stockholm, Sweden, to attend the World Peace Conference and delivered a speech there.

On 30 May, the central government of Pakistan disbanded the United Front Cabinet, imposed the governor’s rule in East Pakistan, and imposed restrictions on Maulana Bhasani’s return. After returning for 11 months in London, Berlin, Delhi and Kolkata, he returned to the country on 25 April 1955 after his sanctions lifted.

On 12 September of the same year, when the coalition government of the Awami League-Republican Party led by Hussein Shahid Suhrawardy formed. Maulana Bhasani pressured the government to adopt a neutral policy, opposing the foreign policy of the government.

In 1956, when Pakistan declared the Islamic Republic in a draft governing bill introduced in the Pakistan People’s Assembly. Maulana Bhasani made a clear statement in opposition to Paltan’s public meeting. The Kagameri Conference organized from 8 February 1957 to February 8, 10 February.

The program started on 8 February, chaired by Dr. Kazi Motahar Hossain. Maulana Bhasani also spoke at the meeting. Among other things, he said, if East Bengal was to be exploited by the central rulers of Pakistan. Then the people of East Bengal would be compelled to inform them of Salamu Olayakum.

At the Kagamari conference, Abdul Hamid Khan Bhashani demanded the termination of the Pak-US military agreement. Prime Minister Huseyn Shaheed Suhrawardy resigned from the Awami League on March 18 after rejecting the demand. The National Awami Party (NAP) formed on July 25 of the same year under the leadership of the Rupmahal Cinema in Dhaka.

By establishing the NAP, Bhasani became involved with leftist politics publicly and has always associated with leftist politics. On October 7, 1957, when military rule issued in the country, Ayub Khan assumed power and banned the activities of all political parties. On October 12, Maulana Bhasani arrested from Kumudini Hospital. He jailed for four years and ten months in Dhaka.

During his captivity, he conducted hunger strikes on 26 October 1960 to 2 November, demanding the help of wildlife and justifying jute. Released on 3 November and became involved in the political process of the National Democratic Front. Met Ayub Khan in March 1963. On 24 September of the same year, he left Dhaka to attend the celebration of Chinese Revolution Day and stayed in China for seven weeks.

29 February 1964, the National Awami Party took over as president of the party revived and 21 July of the same year. The Combined Opposition Party (COP) was instrumental in the formation. The 17 July 1965, Ayub Khan expressed his support for the foreign policy. In 1966, a six-point program presented by Sheikh Mujibur Rahman opposed.

On 22 June 1967, the central government objected to the ban on the broadcast of Rabindra Music from radio and television. He protested it. In November 1967, when the NAP split, the Chinese took the lead. Maulana Bhasani played a leading role in the anti-Ayub movement in 1969. Demanded the release of the accused in the Agartala Conspiracy Case.

On 8 March 1969, he met Zulfiqar Ali Bhutto, leader of the Pakistan People’s Party, in West Pakistan and agreed to establish democracy and socialism. On 26 February, rejecting the roundtable meeting convened by Ayub Khan, he encouraged the workers to follow the siege program. Ayub Khan raised the demand for rice, the establishment of Islamic socialism, etc. Before the elections, after the fall of the government.

We strive for fairness and accuracy of Maulana Abdul Hamid Khan Bhashani Biography. If you observe something that doesn’t look right, contact us!

How to Avoid Online Shopping Scams

More of us are shopping online than ever before, and more frequently, too. So how…

What Kinds Of Subjects Are Included In Online Courses In Gunsmithing?

A Clear Note On TikTok Algorithm

5 Great Reasons to Take Your Car for a Weekly Ride

Understand If You Are Eligible for Liposuction or Not