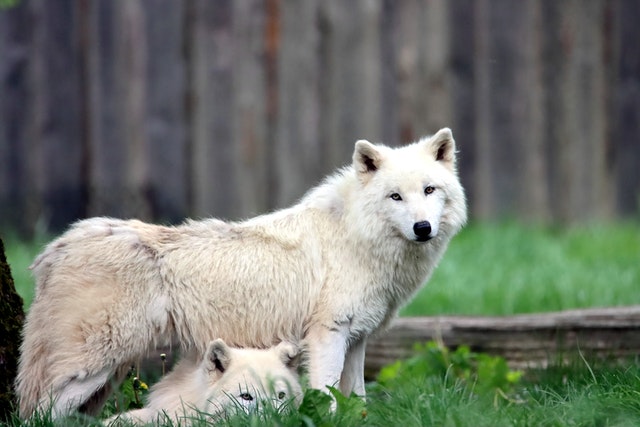 In your everyday life, you have undoubtedly encountered a lot of queries that were out of the ordinary. Perhaps it is you who is posing the strange questions. If you’re wondering are wolves color blind, read on.

They are not colorblind, which is the proper response. Wolves may not see colors the same way humans do, but that doesn’t imply they only see things in black and white. Due to their dichromatic eyesight, they can discriminate between only two color hues.

We’ll examine both the colors that wolves perceive and those that they do not in this post. We’ll also discuss the wolves’ talents for the night and far eyesight.

Let’s begin by defining colorblindness. When a species like humans has two types of cone cells, we label ourselves colorblind. Two different types of cones are natural in animals. In actuality, the majority of mammal species have two cones.

Perhaps you have a question regarding cones. The cones in the photoreceptor are the cells that allow for color vision. The number of cones is the only factor that determines the color spectrum.

When we look at other people, we notice that they (typically) have three different types of cones that can distinguish between green, blue, and red hues. The wolf, however, has two cones as opposed to one.

Wolf color blindness is thus untrue because they can distinguish between hues of grey.

Now that the misconception that wolves only see black and white has been debunked let’s examine wolves’ colors.

What color vision do wolves have?

Although their primary modes of perception are scent and hearing, wolves rely heavily on their sense of sight.

According to the research, wolves generally perceive the environment in yellow and blue tones. While other colors appear to be tints of these two, they are not the same hues. A wolf can perceive the shades blue, yellow, and grey.

What color vision do not wolves have?

Green and red hues are invisible to wolves. Wolves, for instance, could perceive red as a shade of brown. A wolf sees orange and green as having a yellowish tint.

Looking at an antique photograph with fading colors resembles how the wolf sees this world.

What about night vision; can wolves see in the dark?

Wolves can see at night; that much is certain. They have better night vision than the majority of animals. Because wolves are nocturnal animals, night vision is crucial for hunting in the shadows. Wolves have a tapetum lucidum that assists in their ability to see even in complete darkness at night.

What is the tapetum Lucidum, though? The reflector is located just behind the retina. It can reflect visible light in the direction of the photosensitive tissue. This makes it easier to find the light at night. Because of this, wolves can see at night.

At night there are many creatures with sparkling eyes. They each have a lucidum tapetum. They all possess night vision.

Wolves are less color-sensitive than humans, yet they still have certain visual advantages over us. They have eyes situated in a more prominent location and can see considerably farther than we can, in addition to having night vision. Full-color vision is not as crucial to predators like wolves as the other skills are.

What is the wolf’s range of vision?

Wolves are particularly perceptive to movements at a distance. They are 20 times more sensitive to motion than humans are. When you are out hunting, you can utilize this skill.

However, wolves have a poor long-range vision. Their apparent field of vision extends out to around 75 feet. However, their exceptional sense of smell can identify their prey from 1.5 millimeters away.

Other creatures are colorblind as well:

Animals with monochromatic visual perception are “color blind” in this context (one cone). Because they cannot distinguish between distinct hues with a single cone, they can only see black or white in the world. The creatures that are represented include:

Due to their dichromatic eyesight, wolves can discriminate between just two color hues. Wolves may not see colors the same way humans do, but that doesn’t imply they only see things in black and white.

In this post, we’ll look at both the colors that wolves can see and the colors that they can’t. Wolves have a tapetum lucidum that assists in their ability to see even in complete darkness at night. Wolves also have eyes that are more prominently situated and have far wider fields of vision. Their apparent field of vision extends out to around 75 feet.

How Well Can Wolves See In The Dark?

Wolves ability to see in the dark is best against nearly all animals on earth. Only a few animals can see better in dark than wolves. They have this ability due to the nocturnal behavior. It is considered that wolves can see many times better than humans in the dark.

What is the eyes color of werewolf?

A werewolf’s eyes color is golden yellow at standard. This is the color which they get when they born. But when a werewolf turns Alpha, the male and female both then have eyes of red color.

What Is The Rarest Eye Color Of Wolves?

The Rarest eye color of wolves is green. This is the rarely seen eye color in wolves. The wolves go through a phase in their life where they get this green color. That’s why the green color doesn’t last for long. After that phase passes the color of wolves will changes from green to other color.

Are There Wolves With Blue Eyes?

Yes, there are wolves with blue eyes but they are only few in numbers. Because wolves doesn’t born with the blue eyes. And its not there normal color. A wolf only get blue color of eyes when he or she has a genetic defect. The Iberian Wolf have two colors in their eyes because of  the effect in genetics.

A Snapshot of Daily Life at Halfway Houses in New Mexico

After hearing of the famous US singer, Demi Lovato, spending time at a halfway house…

Benefits Of Owning A Commercial Property

How Can You Obtain the Finest Custom Gift Boxes?