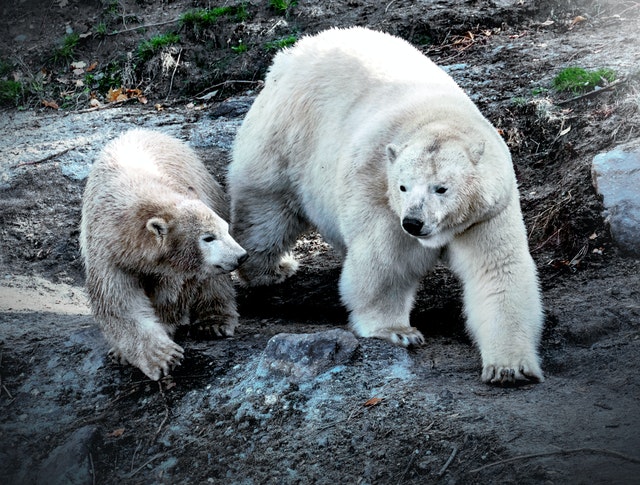 Polar bears are huge and beautiful animals. They belong to a great specie of bears known as hyper carnivorous bears. Despite the that they are sister species of brown bears, they are very different.

alongside the Arctic Ocean. They also lived in its surrounding seas and lands. They can easily survive in cold temperatures. It is because they lived a life in a very narrow region. They can easily hunt in marine water, such as seals.

Polar bears are enormous in size and great specie in bears. Due to this, there are many questions about them on the internet, such as how strong are polar bears?

Polar bears are much more robust, giant, and faster than other bears. A fully grown ear can lift weight more than 1300 pounds. They have the power of 10 humans, which means they are ten times stronger than humans.

In this article, we will explore more knowledge and facts about them. So, read this article for more information.

How Strong Are Polar Bears?

Polar ears are well-known animals due to their raw power. In addition to this, they are thought to be among the most powerful animals that ever walked the globe.

They are also considered the king of the Arctic Circle. This is due to the fact that they are excellent hunters by nature. There are no more predators in the Arctic Circle as compared to them.

Polar bears have some unbelievable superpowers. Thee are just gifted to them by natureFor instance, they have an exceptionally acute sense of smell. They can smell a seal from a distance of more than a mile. They can easily smell a seal buried under 3 feet of ice. It is so crazy.

Another example of their unbelievable powers is swimming. They can swim more than 40 miles in a day. A female polar bear swam for nine days in a straight direction straight and covered a distance of 430 miles. It’s a considerable distance and is known as a record.

They have thick, water-repellent skin. It protects them and helps them dive into the icy water. In addition, their hypercarnivore diet and predatory instincts make them also strong animals.

Polar ears have a foot of 12 inches in diameter. Their paw is so large with their five-toed feet. Their great paws are designed in such a great way. This helps them in balance during hunting and also in swimming. Their paws work as a snowshoe on land and as a paddle in the water.

They live in such a cold habitat. Not many species can survive there, but they can easily stay there.

These bears have adapted over time to be able to survive in the extremely frigid region of the Earth, which is home to very few other animals. It should come as no surprise that their legs and paws have a lot of power. Their sturdy paws are another factor in their ability to stay alive. They are sharp enough to tear the spine of many enemies in just one stroke.

They have strong claws as well as paws. Polar bears are 3.75 inches long. They also help them hold their prey and break thick ice.

How strong are polar bear jaws?

With great jaws and paws, polar bears also have dangerous and powerful biting power. They can easily tear any skull of a big animal into pieces within no time and with low effort.

You will be shocked to know that the sitting power of the opposite ear is strong than the grizzly bear as well as that Africon Lion. You ought to be aware of the fact that the African lion is also known as the king of animals.

Below we have short-listed the top 10 animals from the whole animal kingdom with their jaw power.

How strong are polar bears compared to humans?

It is so funny to compare polar bears to us (humans). It is because they are huge compared to us and very strong in power comparison. In spite of this, I can tell you that the biting power of humans is 162 pounds per square inch if you are interested in making a comparison between the two.

As we mentioned, the average power of a polar bear bite is 1200 pounds per square inch. So, in comparison, the biting force of humans is also deficient before them.

Generally, an adult polar bear weighs 775 to 1,300 pounds, but the importance of a fully grown polar bear may be more than 1700 pounds. As compared to humans, this is the wight of about ten humans.

Female polar bears are lighter and smaller than male bears, but they are more substantial and significant than humans. A fully grown polar bear’s female weight may be more than 600 pounds.

This is a simple answer to the question how strong are polar bears?

They are not able to compare with humans in any way.

This is not possible, but if you face them in any situation, You must stay away from them and avoid going near them.

The one reason for staying away from them is that they are very active hunters of humans. On the other hand, other mammals feel in danger, but they can tear easily for food.

They are known as the giant bears in all species alive on earth, Such as Kodiak and brown bears.

As we know, polar bears are a robust species, but there is not any fight came in the record between polar bears and other species of bears. The leading cause of this is that they live in the Arctic Ocean. Not any other specie of bear can survive there.

But if you have seen any battle between them, I can say there will be no one a ‘winner.

How fast can a polar bear run?

You will be ready to accept them as fast runner animals, but they can run very fast, as they are powerful animals.

Polar bears are mighty and can run very fast due to their strength. You wouldn’t think these white balls’ fur would be so fast.

And we know that the horse is an extraordinary creature that can run incredibly.

Unexpecticaally, they can run at a speed of more than 25 miles per hour. When they have to, they are really good at it.

You are wrong if you imagine them as adorable animals like Santa Clause. In real they are hazardous animals. They are the strongest animals that live in the ARCTIC Ocean.

They are powerful in power and massive in size in all bears species. So, they are known as

King of bears. They look cute but don’t meet them during a lonely time.

Is Polar Bear Is The Strongest In The All Bears?

Can A Polar Bear Beat A Hippo?

When these two are in a battle a hippo would win. The hippo has big mouth and stronger teeths. A Hippo could easily take polar bears hole head into a bite. Which is a clear sign that polar bear cannot win against hippo.

New generation, new Windows indicates a lot of new errors. We can find one of…

Rhine Valley, a true wonder of the world in europe

All You Can Eat Sushi Near Me Guide