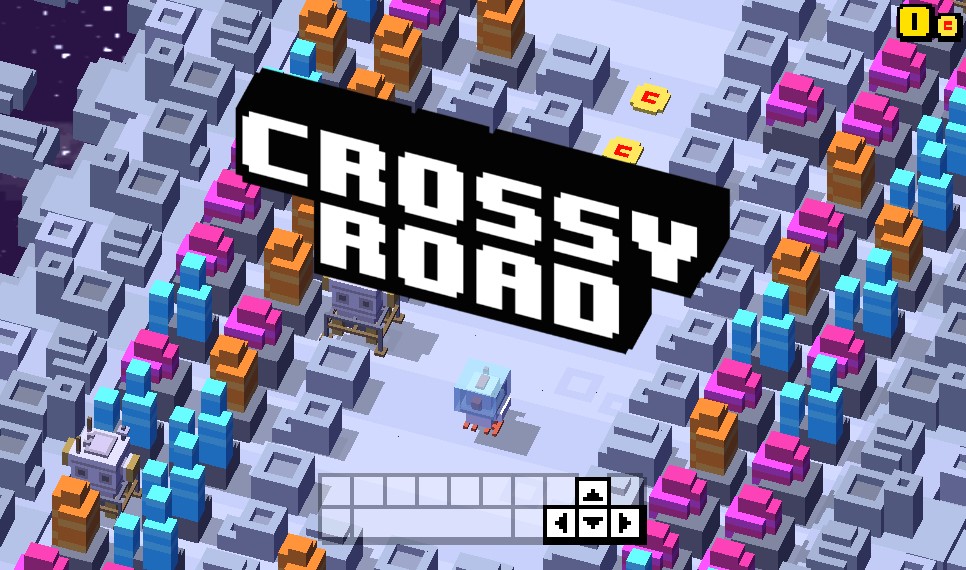 Crossy Road Unblocked is a simple arcade 2D Game. The game’s main objective is to cross the roads safely and earns points. It seems simple and easy to cross roads and win, but it is not. There are so many obstacles in your way to stop or kill you.

There are fast-moving vehicles to kill you, highways and flying eagles to catch you etc. all these are some examples of obstacles which come your way.

When the game starts, they give you a character of chicken: you now have to cross roads and earn points. There are so many obstacles and moving blocks in your way from which you have to avoid yourself.

The is played by the simple four arrow keys of the keyboard. Use the left and right arrow keys to move your character from side to side. To come back, use the down arrow key, and to go forward, use the up arrow key.

The environment of the roads is perfectly made. The roads have trees, cars, logs and trains. The streets and highways also fill up with coins in different places. Collect all these coins to earn extra points. These points help you unblock many other characters to play with them.

The bird is made in the game as an obstacle to making grassy lands look more aesthetic. This means you can encounter birds in the grassy grounds and be aware of those areas. These are randomly searching for food in nearly every lane of the road.

These birds mostly come in flocks. They made birds a quest instead of an obstacle. You now take part in a quest of birds and earn gifts and points on winning the quest.

Trees are the most popular and common obstacles in the crossy road unblocked. You can encounter these trees in grassy land, deserts or snow falling areas. There are many variants of the trees.

All these variants come when you change the characters, as so many crossy road characters have their environment. So the tree variants also come according to the characters. This variant of trees includes Christmas, Australian, Micky Mouse, etc.

Many vehicle obstacles in the game can kill you and end the game if you are hit with one.

The first one is the Black Cab. Black cab serves as the taxi in the game. You will only encounter this vehicle while playing English or Irish mascot. If you hit with this it will squeeze you and end the game.

The next one is the Gas Truck. These are actual life gas trucks which are running on the roads. When you are hit by a gas truck, it will not cross over you; instead, it gets explode, and the game will be over.

The next one is the Police car. The police cars are the most deadly obstacles which come across you. The police car will come suddenly as you don’t have enough time to prepare to avoid this obstacle.

Always make sure that you are seeing the entire screen while playing. If some part of the screen is invisible, you will be late seeing the obstacle. So, while playing, whether you have a full screen or not, any part of your hand is covering the screen.

The police car is the fastest moving obstacle in the crossy road unblocked. It travels two times faster than other vehicles. It will give you less than or near a second to plan and hide. The police car also comes on every road or street. So Always keep your ear open and watch flashing lights that indicate the police car.

Don’t Look At the Score

So remember this sound to check your score instead of looking at the score to get killed.

This is a character specialist game. Every character comes with a change in the whole environment of the game. And to unlock characters, we need coins. So do not get bored by playing with one or two characters; we need to unlock all characters.

Two methods unlock characters. One is through coins, and the other is by purchasing them with real money. So we are not spending any money here. We must collect as many coins as possible throughout the game. Also, there are so many missions and quest in the game that if we complete them, we will get extra coins. So always go for each opportunity of collecting coins.

If you are really in love with the crossy road and want to play another game with the same pattern, then head towards playing this game. Instead of so many characters, this game has Barbie. But don’t worry, you will not get bored.

As this game has so many quality obstacles which always keep you alert in the game. Everything in this game is the same, like crossy road but with little changes. These will not affect the pattern but upgrade the pattern.

This game also works like a crossy road, but you must guide a frog here. In the game, you must get the frog from one side of the road to the other. To do that you have to find a river near the road. Then there are so many turtles in the river.

Make them friends and jump from one frog to another to go to the other side of the road. If You enjoy the crossy highway, you will also enjoy this one. This game changes the methods of playing while carrying the crossy road pattern.

How To Get Totem In Crossy Road?

To get Totem, you must play as Idle, The Crow or Storyteller. These characters will get the top of a Totem floating in the river when playing.

What Is The Highest Score Made In Crossy Road?

The Player Joshua Beesley scored the highest in the crossy road game, 7760. Joshua is a resident of the UK and broke the record in June 2022. Joshua previously broke the highest score of the game back in 2020. In 2022, he broke his record to make a new one.

How a Wireless Credit Card Terminal Helps Your Business

How do you get rid of the Best Snow Shovel For Wood Deck?

What Are The Benefits Of Using K-Style Gutters

The Latest Can-Am Maverick X3 Model: Everything You Did not Know

How Can I Stop My Netgear Extender From Constantly Rebooting?