Who are the Top 10 Motivational Speakers in the World? 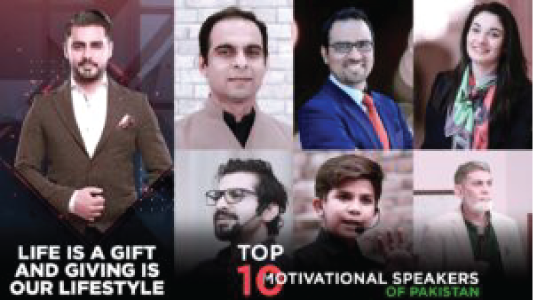 What is motivation? Why do we need motivation?  Why motivation is important for us? The answer to all these questions is simple every person needs motivation because at some point in their life they feel demotivated which makes life difficult for them.

If you feel demotivated then don’t be shy just make a call and talk to them or watch videos of that motivational speaker on YouTube.  This will help you a lot in gaining some positive energy and start afresh day energetically. A motivational speaker helps people in achieving the goals of their life.

They should be energetic every time in addition to their events also. This will give a positive impression to the people who are demotivated in their life. In addition, they should know how to talk confidently and comfortably with people.

Motivational speakers have the ability to make people successful in achieving life goals just by giving examples of life which they experience.

They should know how to make depressed people comfortable just by delivering lectures and understanding the critical situations which they face.

Fahad Khan has all these qualities. He is the best motivational speaker and also helps young people in achieving their dream jobs just by motivating them. Many young people are able to achieve their goals in life by following his guidance.

Top 10 Motivational Speakers in the world

Here is the list of the top 10 motivational speakers in the world:

Fahad Khan is born in Pakistan and moved to Canada at a very young age and start struggling in his life and become famous as a Motivational speaker.

He is the best speaker and started his career at a very young age; moreover, he always motivated people with his videos.  Many people move to Canada for studies, jobs and start their career in Canada just by following the right guidance from Fahad Khan.

Fahad Khan has offices in Canada and Pakistan also. He motivates the young generation of Pakistan to study abroad and achieve something in life.  Fahad Khan is a true inspiration for young people, so be like him.

He works a lot and tries hard just to make people goal achievers like him. in addition, he does online streaming on Instagram, YouTube videos like” Un-Stoppable”. He is very cooperative with his team members and guides them properly.

He is from Australia and was born with a disorder called Tetra-Amelia syndrome. In this syndrome, a person has no four limbs. As you know he is physically not strong so life is very difficult for him. But he never gets disappointed and makes his own organization which is “Life without Limbs”.

He was born in Nepal and is a professional lawyer. Robin writes a lot of books and the famous one is “The Monk who sold his Ferrari”.  He is a great motivational in this way because he writes books that give motivation to the reader.

His father died when he was very young. Life is not easy for him. He started struggling when he married Jean and become the vice-chairman of Automotive Performance Company. He is the best motivational speaker and also wrote books.

He was born in Yakima, Washington, and was Vice-president of Nutri-Bio Company. How did he become a motivational speaker? When the business of his company gets failed then he starts speaking as a speaker at clubs. This makes him famous and he earned a lot of respect.

He was born in Miami, Florida and during his school days, they affirm him as educable mentally retarded. After all of this, he does not get de-motivated and starts the learning process in his life. He earned a lot of respect as a motivational speaker.

His words are very deep that’s why very understanding people can go through his speeches. He also wrote books.

Eric Thomas is very famous and was born in Detroit and at a very young age, he was homeless. He thought not to be lived like that and started working hard for himself. He did a lot of YouTube series and one of his famous is Thank God it’s Monday.

After completing his studies, he became a famous motivational speaker and also wrote books.

Tony is one of the famous speakers from America. He works as a famous speaker and freelancer. He also wrote books which help people in building themself.

From his life journey, we can learn how to be rich from poor life. He started his work for $40 only and found FUBU clothing. This foundation tells us how hardworking he is? He achieved a lot in his life.

He also works as a speaker for the young generation mainly in addition he also wrote a lot of books.

She was born in Kosciusko, Mississippi, and is the most powerful woman. She delivers a lot of speeches and the main motive behind these speeches is to just motivate people, in addition, to doing something big in life.

The Oraph Winfrey Show is one the famous talk show in which she delivers inspirational speeches just to motivate people. The Wisdom of Sundays is one of her famous effort from which readers get lessons to be hero/heroin life.

These motivational speakers which I discussed earlier not become famous in just one night. They do a lot of hard work in their life and then achieve this fame. They gain a lot of confidence in life then they are able to speak in front of you people just to motivate you.

People like Fahad Khan are diamonds and they make their parents proud by working hard. He also motivates youth and other people just to achieve something in life which makes them better people.

How To Decide Which Oxygen Concentrator Is Right for You

When your doctor tells you that you require a home oxygen concentrator, you may feel…

Which Pets Can be Cremated?

5 reasons why businesses should have their own virtual offices Atlanta

Ways To Get The Best Employees

Shopify Can Grow Your Business