What Makes Lederhosen Your Unique Choice? 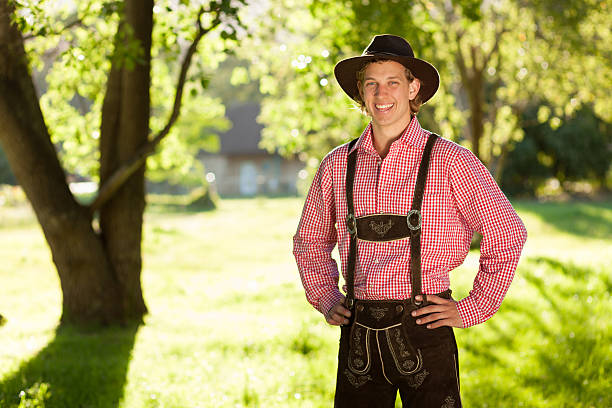 Lederhosen is the most mesmerizing outfit for men as this has been popular and customary in men for ages. They are primarily made up of soft leather, such as deer or any other type of animal skin that is comfortable to wear. Firstly, goat and sheep wool were used in its making; afterward, deerskin was proven to be the right thing for the alpine attire. Suspenders, braces, a crotch flap, and a side knife pocket all serve as distinguishing elements.

For years, men in the Alps have been wearing these trousers to work, embellished with nature-inspired designs that reflected their surroundings. Lederhosen are currently majorly reserved for formal events such as weddings and festivals. These shorts above-knee costumes were not taken as a party attire, but with the inception of modern trends, they were incepted with embellishments and delicate designs. The durable wool-made costume got popular in all classes after its revival. Lederhosen are now highly purchased costumes for Oktoberfest and other festivals.

The available colors range from black to light brown. Typically, the suspenders are joined at the chest by a piece of leather in the shape of an “H.” Both the pants and the suspenders are embellished with intricate needlework and metal snaps and buckles. Mostly it is worn with these colors as wearing bright colored lederhosen can exacerbate or ruin its look. When you buy lederhosen, keep in mind that it has a frayed look and the originality of leather breeches exhibits the shine. The use of animal skin in its making is up to the extent you can afford.

Many lederhosen has a front flap, also known as a small trouser door that drops open to allow access to the restroom. Men typically wear lederhosen with a simple or checkered long-sleeved collared shirt, leggings or stockings, brown or black leather have (shoes), and possibly a felt hat.

Till the 18th century, it was worn by peasants, farmers, and hunters. They used to work on the mountains wearing this outfit, and no one thought they would be donned upon celebrations. After 1883 it lost popularity that immersed people. Then a Bavarian teacher with his fellas re-emerged its value by going to a bar drinking beer while all his crew wore these classic leather breeches, and it was proven the revival of these short-knee costumes. Many people don’t dare to wash it as this costume passes from one generation to the next to commemorate history. It is a dress code that sets you apart and makes your festivity exuberant. Even when nobility emulates the lower classes, that means it’s something worth trying.

From Daily Routine to Fashion Icon

The upper class cherished these leather pieces to portray themselves as fashionable to follow the Bavarian trend—the nobility more than functionality invested in its decor to showcase their social status. Wearing a traditional hat and pairing it with delicate pins can make you stand out. Now, these lederhosen pieces are impactful when you go to a wedding party while your spouse matches the same dress like dirndl or lederhosen among yours.

Yes, lederhosen is still highly trending in Switzerland, Austria, Italy, and especially in Southern Germany. There is no doubt in saying that lederhosen is a traditional icon of Bavarian culture. It is widely worn annually on Oktoberfest in Germany. Tourists from other countries also love to wear this costume and enjoy chicken dance and beer parties under the great Bavarian tents.

Yes, people from different countries come to attend the great Bavarian festival that is known as Oktoberfest. They find it very interesting to wear this traditional Bavarian outfit. Thus they significantly contribute to buying the lederhosen costume and its accessories to create a complete Bavarian look. There is a class in Bavaria that do not like outsiders to wear their traditional costume. Still, the majority feels proud to let them in their circle and enjoy the Oktoberfest eve with them under the shelter of unity.

Yes, of course, because dirndl is a traditional Bavarian costume worn by the females. They also wear Female lederhosen on Oktoberfest. Couples love to get the same outfit at the festival and dress up traditionally. German women love to wear dirndls in different colors and designs. They are seen performing the chicken dance with their friends, partners, and family wearing their beautiful Dirndls on the event and enjoying themselves.

Don’t you think rulebooks are reference materials with multiple aspects? On the one hand, they…

Turn Back the Clock of Aging with Light Therapy

Tips for Getting the Most Out of Your Turbocharger

The Materials Used in Modern Shipbuilding