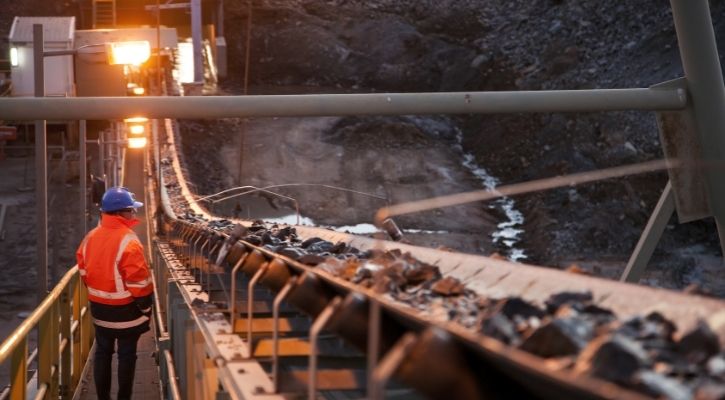 The earliest known examples of mining date back to around 20,000 years ago in Southern Africa. Then, it became an actual industry for the first time for the great classical empires such as China, Greece, Rome, and Egypt. The ways the mining industry has evolved over the years mirrors how human society has grown and developed over the past millennium.

In 1892, Thomas Robins invented the first heavy-duty conveyor belts for use on mining sites for his employer Edison Ore-Milling Company in Ogdensburg, New Jersey. Until this point, conveyors couldn’t withstand the harsh conditions of mining, so people didn’t use them. However, these conveyors still couldn’t go inside of the mines themselves. They were only for moving raw materials outside of the mine but still on-site.

It wasn’t until 1905 that the durability of materials that make up conveyors was improved enough to operate inside the mine. This began the process of facing out mining carts and tracks from being used. Carts and tracks were prone to breaking down or coming off-track, and miners couldn’t move them from the site once they became out of use. With conveyors, they were able to inexpensively speed up their processes. All of this would lay the necessary groundwork for the American coal mining boom soon to follow.

In the early 20th century, mining had turned into one of the most popular and necessary jobs in America and the world. This was largely due to coal, which was still used as the primary fuel source to power a rapidly expanding industrialized society. In 1918 alone, the United States produced 680 million short tons of coal, making it the highest single year of coal product to date—a record that will never be broken.

Today’s mining relies on technologies that would seem like science fiction to previous generations. With the use of AI and robotic technology, mining has become a safer and more efficient practice. Using the software, companies can even make geological scans to see what sediments lie beneath the surface to mine areas with intent.

After taking an in-depth look at the ways the mining industry has evolved over the years, it becomes apparent how the practice has changed to fit the technology of the times.

All You Know About the Hotstar MOD APK

Guest Posting Has Many Benefits