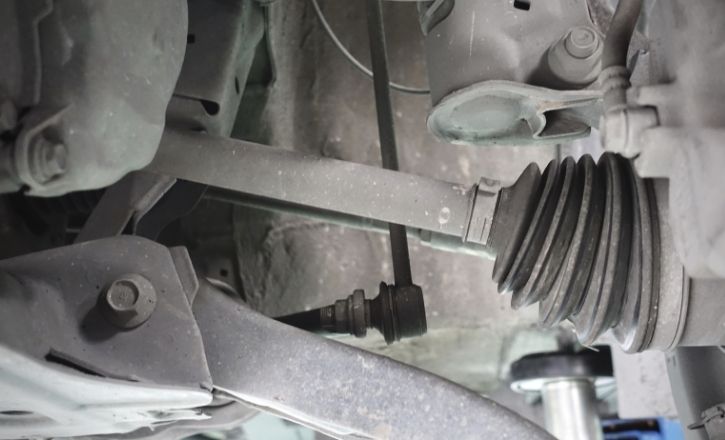 The average car owner has probably heard a mechanic or friend mention a driveshaft in passing. But the typical driver who doesn’t know much about car maintenance is probably unfamiliar with what it is. However, if you understand what a driveshaft is, you’ll be able to identify when there’s a problem with yours more easily. By breaking down how a driveshaft works in your car, we’ll help you become a more responsible and informed owner.

A driveshaft goes by many names depending on the repair shop you’re in, such as driveline, propeller shaft, and prop shaft. Just as the name suggests, it’s a long metal shaft that connects the engine to the axle. As the pistons churn, that energy goes through the driveshaft, causing it to rotate. That rotational energy then transfers through the axle, causing the wheels to spin. Without a properly working driveshaft, you could put the pedal to the metal all you want, but the tire wouldn’t turn an inch.

A rear-wheel-drive vehicle will only have one driveshaft and transmission. The transmission is what regulates the amount of energy that the engine releases. It’s what directly connects the driveshaft to the engine. Then, at the rear axle, the shaft connects to a differential. With rear-wheel drives, you have one long shaft that stretches the length of the cab.

When you have a four-wheel drive, you have two driveshafts that propel each axle’s set of wheels. By connecting a transfer case attached to the transmission, the vehicle can have front and rear driveshafts that operate independently while still being controlled from the same point of origin. Each driveshaft requires its own differential as well.

Since a driveshaft is constantly in motion as you press the accelerator, it will become an increasingly noticeable problem if it becomes bent or otherwise damaged. If there’s a minor problem with a component of the driveshaft, the problem will first manifest with some unusual noises and vibrations when accelerating. However, as it gets worse, the driveshaft will crack or snap. This will sever the connection between the engine and tires. At that point, the vehicle will stop in its tracks, and it won’t be operational again until you replace the part.

After breaking down how a driveshaft works in your car, you can quickly identify if there are any problems with the part and seek replacement as soon as possible. Cars are like living, breathing things, constantly changing and evolving. By gaining a better understanding of the individual parts of the vehicle, you can become more in tune with these changes. You’ll then be able to identify the need for repairs faster.

Reasons to Buy an Electric Vehicle

The Driving School Benefits that May Surprise You

What to Know About Inexpensive Heavy Duty Truck Parts

What’s the First Thing You Should Upgrade on a New Car?

Idaho car accident: How can an attorney help?

Not An Office Person? Check Out These Most Popular Work From Home Jobs Just For You

If you’re not an office person, you may try to find a job from home.…

Types of Window Blinds and Why Prefer This Option Over Curtains?

Ten Questions To Ask When Choosing A Family Law Attorney

How to Write a Good Story