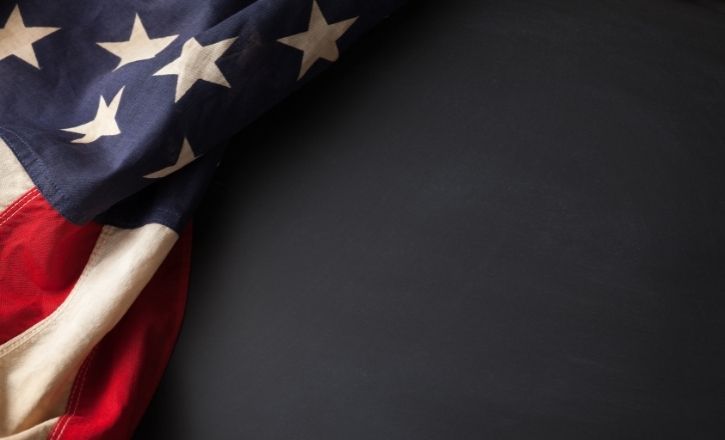 Many variations of the United States flag dating back to the 19th century represent the country’s creation as more states joined the Union. Most people are familiar with the 13 red and white stripes and the blue box containing all 50 stars, but here are some United States flags throughout history that demonstrate the nation’s beginnings.

This early variation first saw the light on December 3, 1775, aboard the ship Alfred in Philadelphia. The banner, also known as the First Navy Ensign, consisted of 13 red and white stripes and the British Union Jack in the upper left-hand corner.

The 13-star flag later replaced the Grand Union flag once the colonists declared their independence. The legend of this banner variation—often dubbed the Betsy Ross flag—remains cloudy, as there is zero documentary proof of Ross’s story.

The Third Maryland Regiment first used the Cowpens flag around the late 1770s. Unlike earlier versions, this banner did not have an official star pattern. However, the design resembled the 13-star model, except that the 13th star was placed in the middle of the circle.

Also known as the Fillmore Flag, this variation was a revolution banner flown at the Battle of Bennington in 1777. The canton still housed 13 stars in honor of the original colonies, but it also featured a large “76” commemorating the year the Declaration of Independence was signed.

Politicians running for president used to use the US Great Star flag as a banner. What made this variation unique was how its 26 stars aligned inside the blue canton in the shape of a star.

Of course, the banner you recognize most is the 50-star flag. A genuinely famous sign of patriotism, unity, and pride, the current version of the Stars and Stripes flies during many occasions, such as Flag Day and Pearl Harbor Remembrance Day. This banner’s design became official once Hawaii joined the nation on August 21, 1959.

As one of the most recognizable symbols of any country, the American flag was subject to many changes throughout time. However, the various United States flags throughout history showcase the nation’s birth and continuous progress.

Where to Buy Traditional Pakistani Clothing?

Are tactical harnesses good for dogs?

How To Create Custom Photo Prints for Birthday

4 Tips for Choosing an Outdoor Fireplace

Everything You Need To Know About Cannabis Insurance

Learn About the Costs Included in Your Electricity Bill